With the pandemic creating a more distance-centric workforce, it makes sense that technology has become more important than ever to employees. That said, some employees prefer certain computers or types of equipment over others, and employer-provided technology can sometimes create barriers for some employees who might not be used to working with what they are given.

This has given way to the BYOD (Bring Your Own Device) approach in the workplace, which allows employees to use whatever devices they choose for work. Some use their personal laptops, while others choose tablets, phones, or a combination of the two. While it makes sense for employees to have the opportunity to work remotely in the most comfortable and productive way, this approach has affected some employees primarily on the basis of information and data security and safety.

To get a feel for the BYOD trend in today’s world of remote work, Beyond Identity interrogates 1,013 current employees with varying perspectives and experiences in workplace technology.

Interestingly, the Beyond Identity study showed that while, unsurprisingly, laptops and desktops were the primary device used for remote working (96.7% of respondents reported using one), smartphones were not far away. Specifically, 66% of respondents said they use a smartphone for work. Only 24.4% said they had used a tablet and 5.7% said they had used an e-reader. Overall, employees used an average of 2.5 devices for work.

Naturally, security has become a major concern for employers in the remote work landscape. Securing devices has become easier as technology advances, but employers understandably worry about securing data and information outside of the office. As a result, many have policies in place relating to securing personal devices used for work. The study found that 51% of those surveyed confirmed that their employer had a policy regarding the safety of personal devices at work. Almost 38% said their employer did not have a specific safety policy and 11.1% said they were not sure.

VPNs (virtual private networks) were less common but have certainly become more prominent in the remote landscape, with 51.1% of respondents reporting using one for work and personal devices, while 54% reporting using a VPN for professional devices. devices only.

A common problem with devices used for work versus personal use is that of brands. We live in a society where a large percentage of people regularly use and prefer Apple devices, especially computers, but their employer may not always have the budget for such expensive technology and prefer employees to use brands. less expensive. Some employers, however, seemed to prefer different brands for the job, possibly for a variety of reasons.

Of course, employees tend to have their reasons for using personal devices at work. For some it’s about comfort or brand preference, but for others it’s about having everything in one place rather than multiple devices for different uses. Where did the respondents land on these reasons? Thirty-one percent said they prefer to use their personal devices for work because they like having it all in one place, while 28% rated their devices as higher quality than those provided by their employers. Over 29% said they use their personal devices because their employer doesn’t provide them with the devices they need to do their jobs.

Only 24.3% of employees said they used personal devices for reasons of brand preference, while 22.6% said they felt their work devices lacked the functionality they needed to productivity.

The impact of COVID-19

Ultimately, the way we use devices for work will continue to change as remote working becomes more common during and after the pandemic. But one thing is certain: Employees and employers alike have a wide variety of concerns and preferences, and the issue of technology for remote working is certainly not one size fits all. 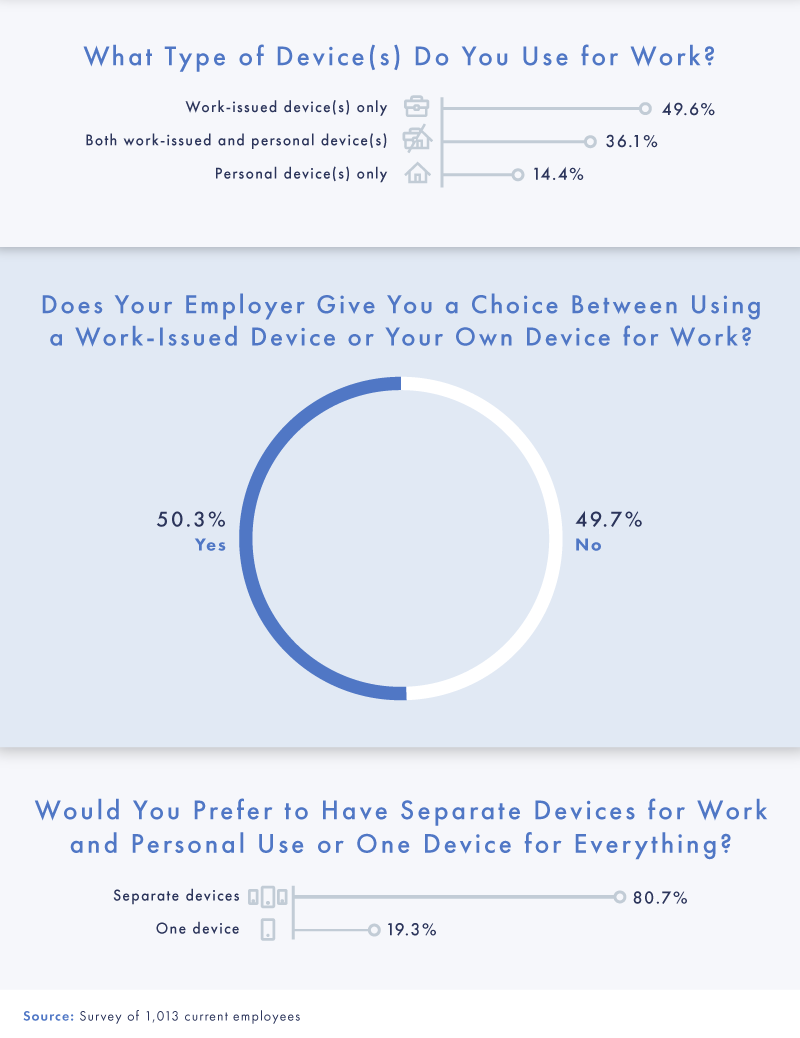 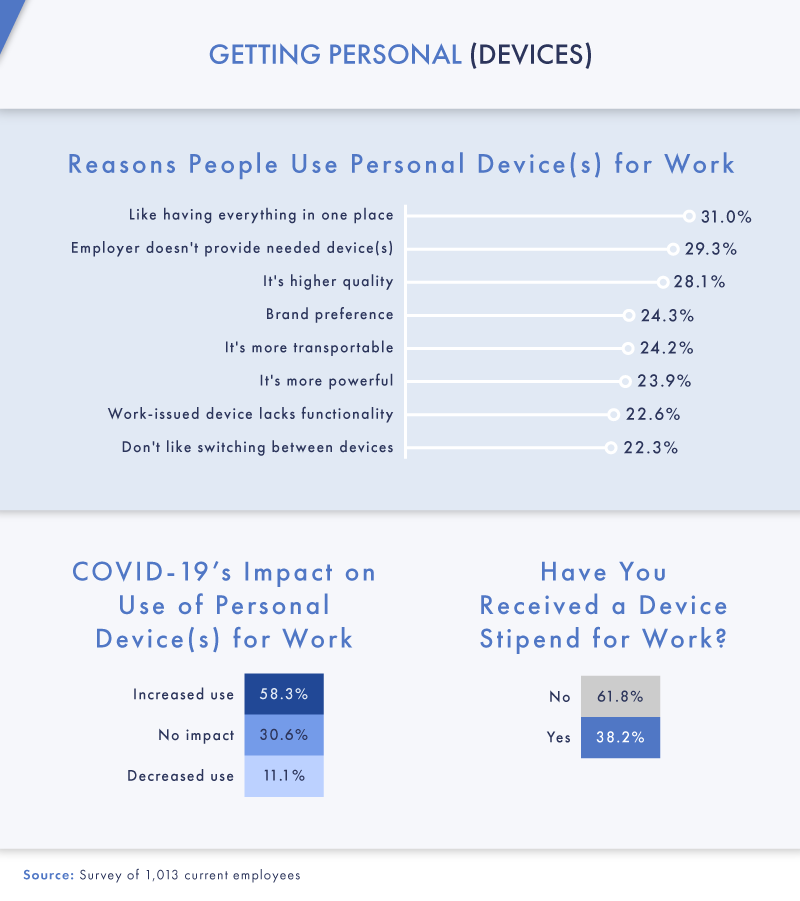 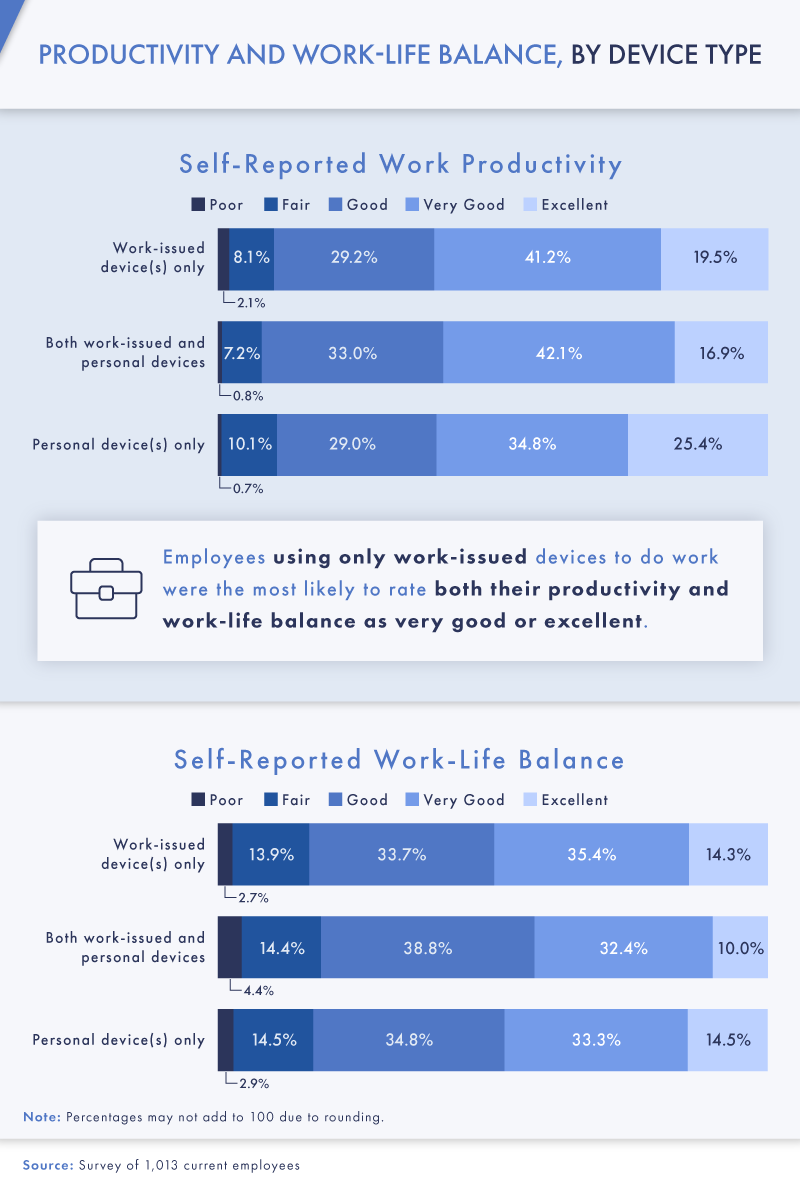 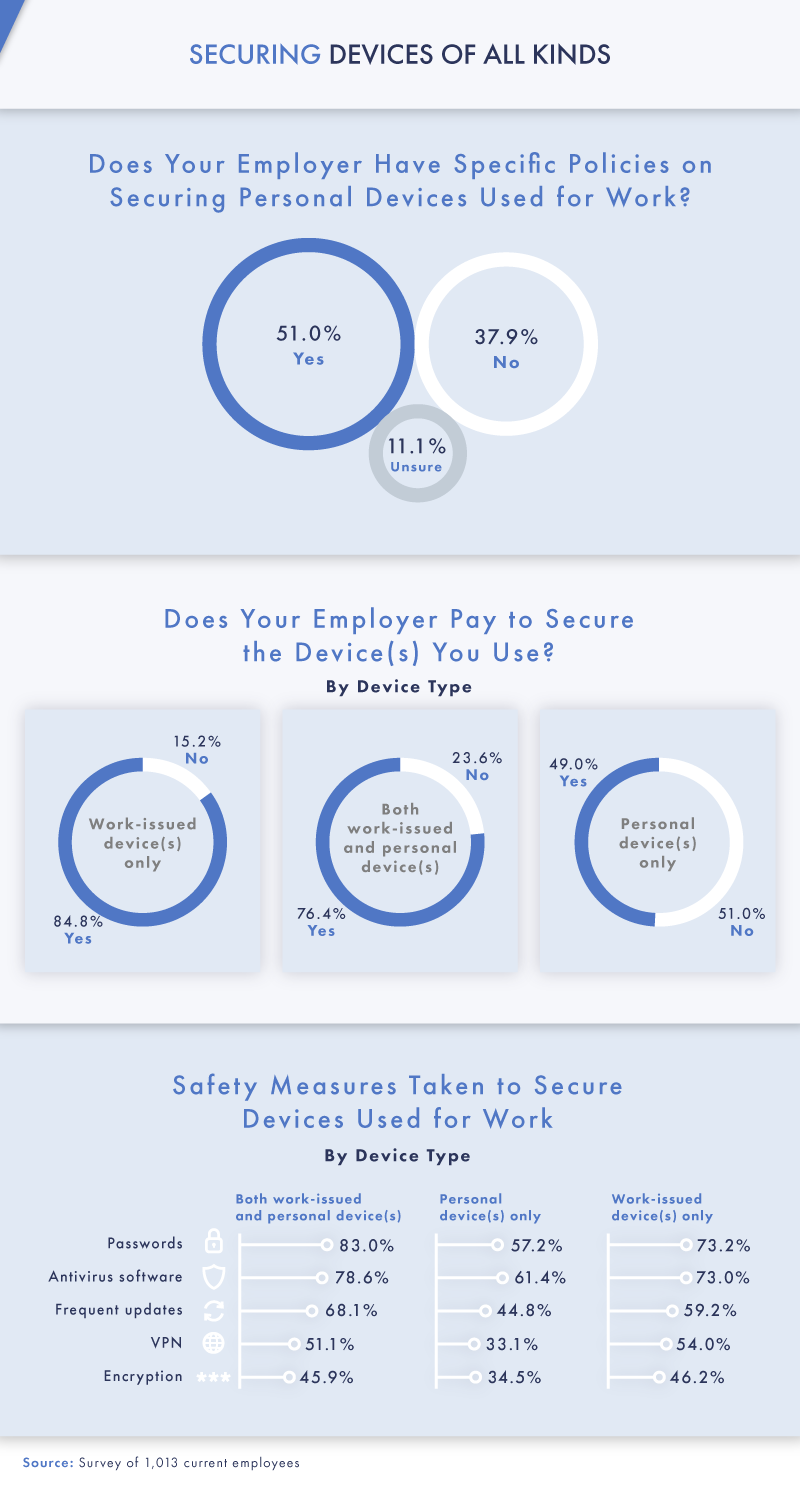